In March, the DP1 class traveled to Taxila-Khanpur for 4 days to complete activities that are best done out of the classroom. The students visited the 400 year old Rohtas Fort, built around the time Shakespeare was writing King Lear, which the students have been studying in Literature. Historical sites always raise many knowledge questions, for example, ‘how sure can we be that what we see is what is described by historians?’ Walking through the site gave the students and staff a real perspective of just how vast the historical site is. After arriving at Khanpur, the students had a Theory of Knowledge lesson on what they’d seen on their journey, i.e.. their observations, for example, a McDonalds on the GT Road, an endless problem of plastic waste, the graffiti and plastic waste at the Rohtas Fort site, etc.

The students took Chemistry equipment and conducted tests on water sources, including the lake, a nearby stream, a container of rainwater, and water from a drink bottle and compared testing in lab conditions and in the natural context. Students applied two research methods used in Environmental Science and Geography, which they’d read about in textbooks. Using the grassy lakefront area, students could again see the difference between research in theory and research in situ. After a short drive and a brisk hike to the top end of the lake, we visited the Bhamala Stoopa site, which also houses the partially excavated university site dating back to 100AD. This was good preparation for the students’ visit to the Taxila Museum the following day and it certainly helped to understand many of the museum’s exhibits having seen at least one of the original sites. Again, the museum raised a range of knowledge questions, for example, ‘on what basis are materials chosen or not chosen to be put on display?’ Business and Economics students were interested to learn that Taxila attracts more than a million tourists/visitors annually. The students were driven over the Khanpur dam and up a hill/island to see the lake/reservoir, the dam and spillways, and down into the valley below the dam. Such sites are common learning opportunities in Economics, Geography, and Environmental Science because while they usually create many benefits, they also create many costs, often incurred by people who do not enjoy the benefits. No textbook or website can show the expanse of such a project, but by seeing it ‘in person’ students can appreciate the extent of the benefits and costs.

Most students also achieved some CAS learning. All were taught some of the complicated Physics associated with a bow and arrow and then used this knowledge to help learn the basics of archery. A little bonus, unplanned activity was learning to skip stones on a lake, and then learning that the Physics of this was applied during World War 2 when the British Air Force developed bouncing/skipping bombs to destroy a dam in Germany’s Ruhr Valley. Another unexpected activity was watching kite flying, banned in Punjab, but still enjoyed in KPK.

My perceptions from the trip: what a joy it was to have been treated to Pakistani hospitality again; how good is any food when cooked on a barbecue and eaten in front of a bonfire, the electricity supply was ‘erratic’, but we discovered we can survive without my phone and laptops. 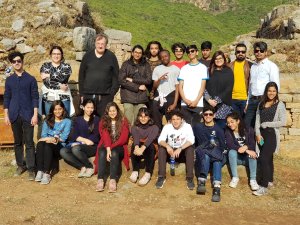 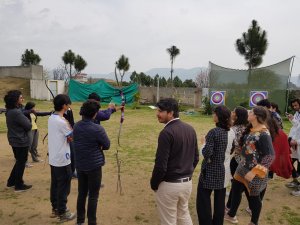